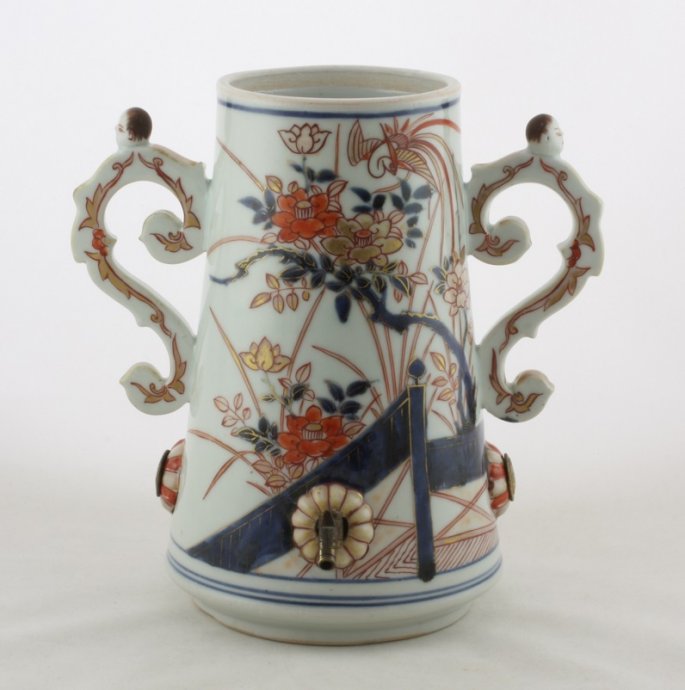 Tapering cylindrical coffee pot on footring. The original cover is missing, a hole to the base. Two karakusa (spiky lotus) shaped side-handles with thumb-rests in the shape of a human head. The three holes in the lower part pf the body, the one on the front with a bronze tap the other two beneath the handles with a bronze rosette, are surrounded by a kiku-flower modelled in low relief. Imari decorated in underglaze blue, iron-red and gold on both sides with a fenced terrace with flowering plants, trees and a phoenix in flight. Scrollwork on the handles.

Like tea, coffee was first regarded as a medicinal drug: similarly it suddenly became a popular beverage at the end of the 17th century. Coffee houses were opened all over Europe and, whereas drinking tea was mainly a womanly pursuit, coffee houses were almost exclusively frequented by men.

Apparently, coffee pots with spouts, well known in Chinese export porcelain, were not made in Arita. A specifically Dutch and rather rare shape is the coffee urn with two elegant curving side-handles and/or three taps. These metal taps were later added in Europe, in spaces left for the purpose. Jörg mentions that no examples of the three tap type coffee can seem to be represented in public collections in the Netherlands. (Ford/Impey 1989, p. 90), (Jörg 2003/1, pp. 192-193)

For a coffee pot with identical form and handles with human heads, please see:

Condition: A frit to the rim and a hole in the base.