On this page you'll find my latest acquisitions, It may, however, take some time for all objects to load.

After four weeks each object in 'Recent Acquisitions' will be moved to their specific category.

Blue and White wares since 1722

Tea caddy of rectangular form with canted corners, a flat shoulder with a short upright neck. The flat base is unglazed. The original cover is missing and replaced by silver mounts (marked). Decorated in underglaze blue. The shoulder rim is over-decorated in gold (Amsterdams Bont?). On the body a pagoda and shrubbery near a river running before a crenulated wall with a fortress and trees. The shoulder is decorated en suite. The silver mounts are marked with an unknown mark.

The scene of houses and shrubbery near a river running before a crenulated wall is unusual in Chinese Imari ware. This type of decoration, with the brick wall and the pagoda is often referred to as the 'Chinese wall' while others think it is a Chinese fortress within walls. (Gordon 1977, p.47) 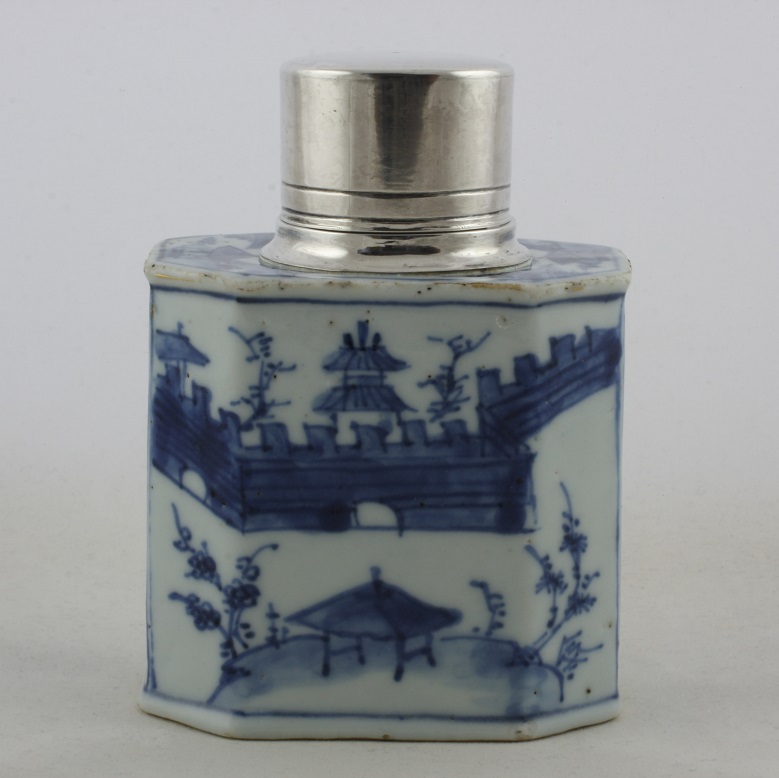 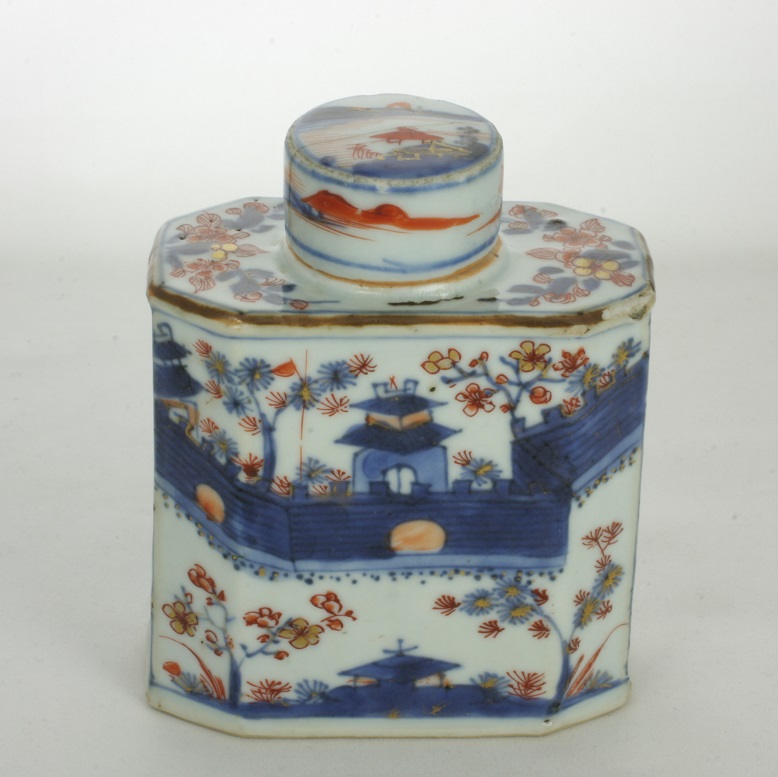 Apparently the underglaze blue design with houses and shrubbery near a river running before a crenulated wall was popular at the time. In this comparison, between object 2012259 and sold object 2010567, we can clearly see the similarities in the underglaze blue and the Chinese Imari decoration.

The in gold on the over-decorated shoulder rim has also been applied to spots where the glaze had already been flaked off probably due to use. This proves that the over-decorating must have been done at a later time. A previous owner might have decided to add this over-decoration himself or have it added by a workshop specialised in Amsterdams Bont over-decoration at that time.

Condition: Some shallow glaze rough spots to the edges of the shoulder and a shallow chip to a corner of the foot.

Teacup on footring. Decorated in underglaze blue with a group of people on a spit of land jutting into a lake or the sea. To the left on the shore two children with outstretched hands, at the far-left rocks with trees. Around the inner rim a narrow band with honeycomb motifs. The teacup is decorated en suite.

A recent discovery shows that this composition is taken from a part of a colour print by Johannes Teyler (1648-c.1709) from his Opus Typochromaticum (1688-98), depicting The Fall of Phaëton. Two other prints from this Opus are known on Chinese export porcelain. (CohenandCohen.co.uk, REF No. 6375)

Johannes Teyler (1648–1709?), a philosopher, mathematician and military engineer – not an artist or engraver – was granted a privilege for the States of Holland and West-Frisia for printing engravings and etchings in colour in 1688. His exact working manner is not described in the privilege, but from the production of the workshop that he financed can be seen that all prints were inked à la poupée in multiple bright colours. From 1695 Amsterdam print dealers also started publishing prints in Teyler's manner. The so-called 'Teyler prints' are known to print historians and antiquarian print dealers. The production from the workshop of Johannes Teyler is estimated at over 400 unique prints. (source:The New Hollstein Dutch & Flemish Etchings, Engravings and Woodcuts Johannes Teyler and Dutch Colour Prints, (A.Stijnman (compiler) and S.Turner (editor), Sound & Vision Publishers B.V., Ouderkerk aan de Amstel, 2017)) 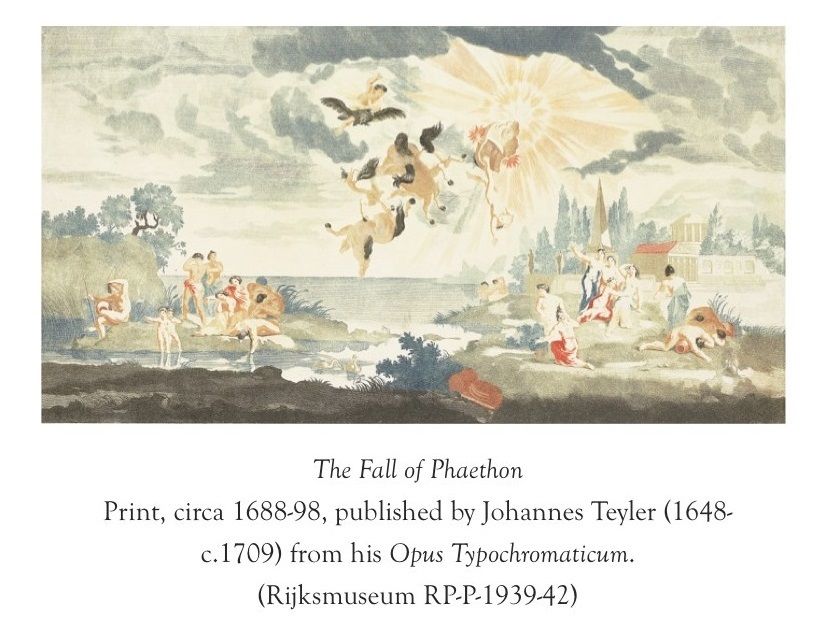 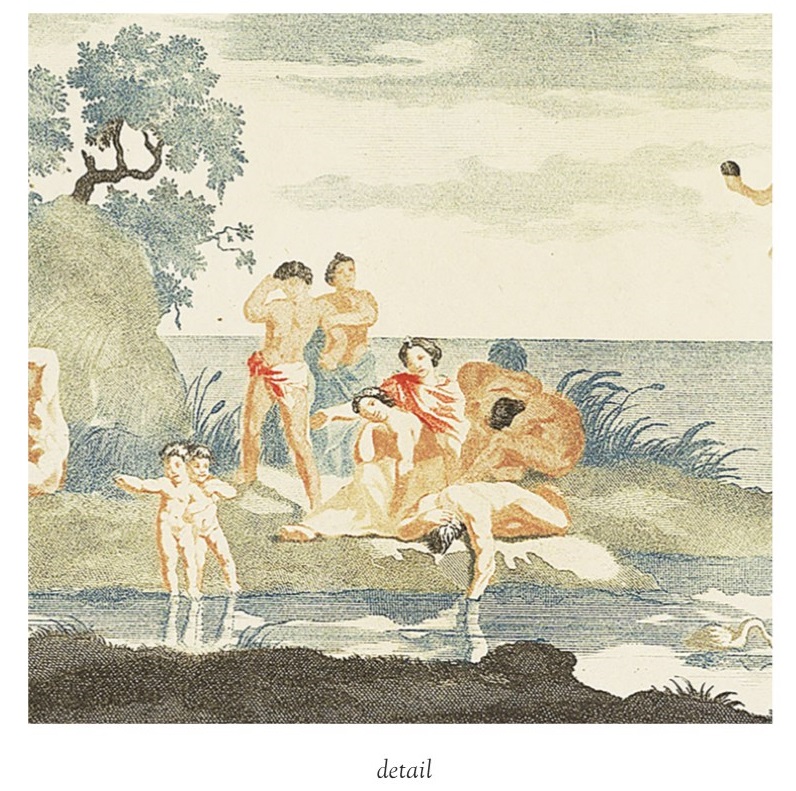 Phaëthon, the son of the Sun God Helios, had begged his father to prove his paternity to his friends, so Helios had sworn an oath on the River Styx to grant any wish that the youth wanted. Phaëthon chose to ride the famous sun chariot and despite his father’s warning that the steeds were too strong for him, the young man took the reins. His lack of control soon led to disasters when he flew too low and scorched the earth. (CohenandCohen.co.uk, REF No. 6375)

The part of the Teyler print here shows a group of River Gods in distress, who had petitioned Zeus to stop Pheëton’s uncontrolled Chariot ride because it had caused their rivers to dry up. When Zeus kills Phaëthon with a thunderbolt he falls into the River Eridanus where he is drowned. (CohenandCohen.co.uk, REF No. 6375)

Soft-paste porcelain, which is quite different from European soft-paste, originated about 1700 and became popular in the second quarter of the 18th century as part of the export assortment. Unlike ordinary porcelain, it is not translucent and often has a creamy-white appearance. The glaze is often finely crackled as the result of a difference in cooling between the glaze and the body. The latter is made of a white-firing clay, called "huashi" or "slippery stone", the use of which is documented in the reports of 1712 and 1722 by the Jesuit Père d'Entrecolles. As this clay was expensive, soft-paste pieces are usually small and thinly potted. They are also well-painted, as the body is particularly suitable for detailed drawing. Besides this "true" soft-paste, there are pieces with an ordinary porcelain body and a coating of "huashi" clay, which gives the same effect. Due to the porous nature of the fired "huashi" clay, soft paste objects are overall lighter than hard paste objects. The production for export flourished between 1725-1745 and came to a stand around 1750, twenty years later the production revived but the quality of the objects produced never reached the quality level of the previous production. Only a few Chine de commande objects are known to be made of soft paste porcelain, most famous being 'Neptune' and this mythological design formerly known as 'Castaways or slaves' or 'The wreck of the Grosvenor' design because it seemed to depict a famous incident when the Grosvenor, returning from India to London was lost off the coast of South Africa in 1782. Of the 123 survivors who were cast ashore only 18 made it to Cape town. (Oort & Kater 1982, p.155), (Jörg & Van Campen 1997, p.117), (Sargent 2012, p.304), (CohenandCohen.co.uk, REF No. 6375)

Saucer on footring, slightly spreading rim. Imari decorated in underglaze blue, overglaze iron-red and gold with an all-over design of a shaped jardiniere filled with a rock, flowering iris and camellia. The pot has a ribbon and a tassel on each side and stands on a long table near a fence and a swirl of water. Above the pot a single large ruyi-motif filled with a simplified flower and leaves on a gold ground; below the motif pendent wisteria and prunus. The reverse is undecorated.

The well-executed design is a good example of the painter's eclectic approach. He combined common motifs such as the flowerpot, the fence, the ruyi-design and the pendent flowers without attempting to depict a realistic and coherent scene, intent only on making a pleasant decoration and composition. (Jörg 1989/2, p.200, cat. 254)

For an identically shaped, sized and decorated teacup and saucer, please see:

In his description of this identically shaped, sized and decorated teacup and saucer Jörg notes 'No comparable tea wares seem to be known'.

Condition: Some glaze firing flaws to the reverse rim.

Dish on footring, flat rim. On the base four spur-marks in a Y-pattern. Decorated in underglaze blue with a flowerpot filled with flowering peony plants on a fenced terrace in a circular cartouche. The sides and rim in Chinese Kraak-style with six large panels containing a bird perched on a rock flanked by flowering plants and six narrow panels filled with a floret between scrolls on a underglaze blue ground. The reverse is undecorated.

The crackled glaze is caused by the unequal contraction of the body and the glaze during cooling in the kiln after firing. (Jörg & Van Campen 1997, p.235)

Condition: Some firing flaws and fine crazing to the glaze, caused by the firing process.

Teacup and saucer on footrings with spreading sides and rims. Decorated in various overglaze enamels, and gold after the style of Meissen porcelain with a European harbour with a large fortress, mountains houses, boats with fisherman and trees. On the quay two men hunting for ducks. On the sides and rim a decorative pattern of scrollwork. The reverse is undecorated. The teacup is decorated en suite.

This French expression is used for Chinese porcelain, of which the shape and mainly the decorations are derived from Western examples. Decorations, often European prints (engravings) were cheap and easily brought along by ship to Asia. They were then meticulously copied on order in China, at first in blue and white, but very soon (from approximately 1715 onwards) also in enamel colours. This often-involved porcelain featuring family coats of arms – how fancy this looked on a dinner table – though all kinds of other depictions were also popular. Scenes from the Bible and classical antiquity, depictions of ships, harbours, landscapes as well as city views were all quite common too. Slightly erotic scenes were also much favoured. (The World at Home: Asian porcelain and Delft pottery held from 17 June 2017 to 10 March 2019 at the Groninger Museum, The Netherlands)

The design on this teacup and saucer is a direct copy from a Meissen original, including the decorative pattern of scrollwork which is typical of Meissen porcelain of the period 1720-1740. The very detailed and refined painting, so faithfully copying the original, illustrates the craftsmanship of the Chinese porcelain painter and the quality that could be reached in export porcelain. However, Chine de commande, like this must have cost a good deal more than the ordinary enamelled wares for export. (Jörg 1989/2, p.226)

For an identically decorated dish, in the collection of the Rijksmuseum Amsterdam please click here.

The World at Home: Asian porcelain and Delft pottery held from 17 June 2017 to 10 March 2019 at the Groninger Museum, The Netherlands.

Coffee cup with handle on footring. Decorated in encre de Chine, iron-red and gold with a woman wearing a half-opened nightdress revealing her breasts, hands, buttocks and legs, clipping her toenails while being watched by a servant. in an oval shaped medallion, round the rim a stylised spear-head-pattern border.

Perhaps the 'The Bath' design was made by Duflos as one of a series and the design on this coffee cup was made after another, yet unknown, print from this series.

Condition: A restored chip with a connected (sealed) hairline to the rim.