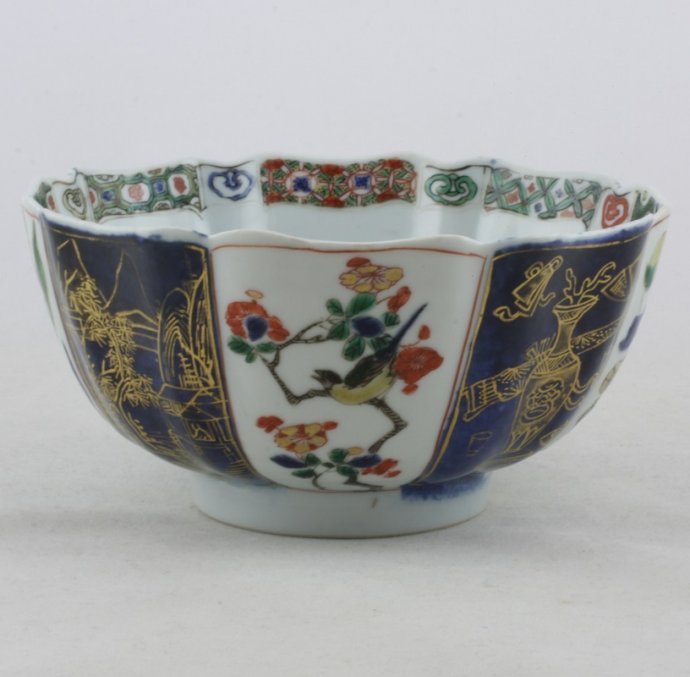 Octagonal bowl on footring with spreading sides. Decorated in powder blue, underglaze blue and various overglaze famille verte enamels. The sides are divided in eight panels and on the outside show alternately, a bird perched on a branch of a prunus tree or flowering plants and some of the 'hundred antiquities' or a river scape on a powder blue ground. Around the lobbed rim on the inside a border with reserves filled with geometrical patterns and flower heads alternating with ruyi heads. On the bottom, flower sprays in a double concentric band in underglaze blue.

There is a special category within Kangxi blue and white, namely 'powder blue'. This name refers to a specific technique used to decorate porcelain. Cobalt blue oxide was not applied to the surface of the dried object with a brush but was blown onto it through a hollow pipe that was covered at the opposite end with a piece of gauze. Once the object had been glazed and fired the surface showed tiny dots and patches of blue that suggest depth and create an interesting texture. Before blowing the blue, panels and cartouches could be reserved by covering the surface with paper cutouts of the desired shape. The areas beneath these were still white after firing and were subsequently filled with enamelled decorations, usually of the famille verte type, sometimes in iron red, showing birds, flowering plants, landscapes or figural scenes. Gold could be added in a third firing process, but it has usually worn off by now. Powder blue rarely occurs any more after 1725. It was supplanted by 'Batavia Brown', an evenly applied underglaze brown color with panels that were filled with decorations in the more modern famille rose enamels.

This bowl showcases the virtuosity of the porcelain producer, who used various decorative techniques in different media for which three kiln firings were needed. (Jörg 2011/2, p.58)

Condition: Four hairlines and a restored chip to the rim.